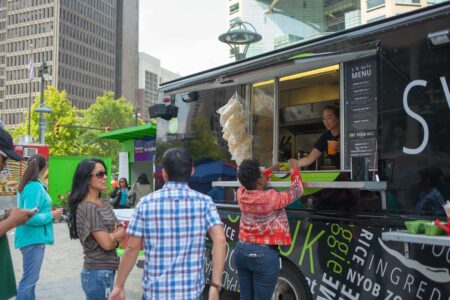 DETROIT – The Downtown Detroit Partnership’s (DDP) popular Downtown Street Eats program rolls back into Downtown Detroit Monday, May 16 to kick off the 2022 season. City-goers are invited to visit Cadillac Square and the Woodward Esplanade weekdays from

11 a.m. to 3 p.m. where some of the region’s best food trucks will be serving up the tastiest delights to satisfy the most particular palates.

“The DDP is proud to provide economic opportunities to small businesses and mobile food operators in Detroit and we are committed to showcasing and highlighting their diverse culinary concepts in our Downtown Street Eats program,” said David Cowan, chief public spaces officer for the Downtown Detroit Partnership. “Food is an important part of how we celebrate our shared and unique cultural identities and the Downtown Street Eats program is an environment where businesses can thrive and express themselves while serving a broad range of visitors.”

Andrea Jackson, who goes by Chef Khalipha, is owner and operator of Khalipha’s Mobile Kitchen and she’s excited to join this year’s Downtown Street Eats lineup. “I’m ready. I’m ready to meet new customers and feed people. We have the best halal soul food in town and I want the world to know. Cooking is my passion and what I was destined to do. Our two-year anniversary is in July and my plan is to continue spreading love and joy through my food. Being a part of Downtown Street Eats is an opportunity to do just that, while also helping to increase the visibility of my business and expand my customer following.”

Chef Khalipha is a self-taught chef who has built a reputation in the community for delivering her version of soul food through her first culinary endeavor, “Khalipha’s Katering.” For more than a decade Detroiters and beyond have been seeking out her diverse menu offerings, which are appealing to a broader audience than one might expect. Her halal beef ribs and lamb shanks are some of her food truck’s bestselling items, as is the Soul Bowl, which consists of a choice of meat and two or three sides, such as the popular smokehouse mac & cheese.

Another enthusiastic food truck owner, Demetrius Edison of The Egg Hunt, which is approaching its one year mark in June, said it is a blessing to be a part of this year’s Downtown Street Eats program and hopes it will help increase his truck’s visibility in the community. “It’s always been a dream of mine to own a food truck. My dad taught me to cook, said it was a skill I needed to have. I developed a quick appreciation and passion for cooking. Seeing people smile and enjoying my food motivated me to go after my dream. I live near the downtown area and have spoken to a few of the food truck owners, who gave me some good advice about how to get started. My business partner Ron Johnson and I spent days trying to come up with a concept that was familiar and, yet, at the same time would set us apart from the others and bring something different to the mix, so that’s how we landed on breakfast-brunch.”

The Egg Hunt’s specialties include chicken & waffles, shrimp & grits, breakfast burritos and biscuits & gravy. Edison’s next goal for The Egg Hunt is to work with Detroit youth, bringing them on board to teach them cooking skills and serve as a mentor.

“I am excited to curate the Downtown Streets Eats program for the DDP, which shares my passion for supporting small business. There’s a great variety of trucks participating this year, and if you live, work or just love Downtown Detroit we want you to come out and enjoy,” said Jennyfer Crawford, an entrepreneur whose Detroit-based Ask Jennyfer brand marketing firm has been working with the DDP for more than five years to host events, such as Market Fridays at Cadillac Square where people can shop for fresh produce and handmade goods. “Downtown Street Eats gives small businesses the opportunity to have a presence in Detroit, which I continue to advocate for.”

To support the Downtown restaurant and small business community, visitors are encouraged to enjoy the many dining options in and around Downtown Detroit Parks, from casual to fine dining and everything in between. They can dine indoors, enjoy beautiful outdoor patio seating at restaurants, like Parc and Lumen, or get a carry-out order to bring to the park to eat while they enjoy the views. Rolling green lawns at Campus Martius Park, Capitol Park, DTE’s Beacon Park and Grand Circus Park make the perfect picnic spots.

In collaboration with over 250+ community partners, the DDP has established itself as a leader in creating a wide array of engaging initiatives, cultural events and programming, as well as managing and operating Downtown Detroit’s historic and world-class public spaces and urban parks.

Along with the food trucks, people can explore the parks the DDP cares for while enjoying beach parties, fitness classes, markets, movies, music and other free, family-friendly events.

For a schedule of food trucks and other fun events happening in Detroit parks, visit DowntownDetroit.org/events.

The Downtown Detroit Partnership (DDP) strengthens and supports Downtown Detroit through strategic initiatives and programs. The DDP convenes business, philanthropic and government partners to create a vibrant and resilient urban core for Detroit and the surrounding community. The DDP is responsible for programming, managing and operating several of Downtown Detroit’s parks and public spaces. For more information, visit downtowndetroit.org. 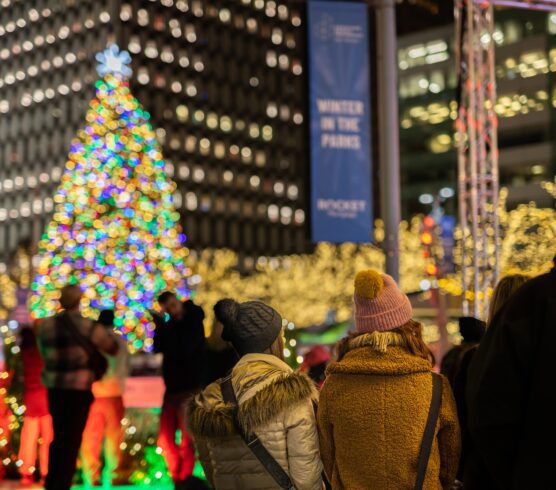 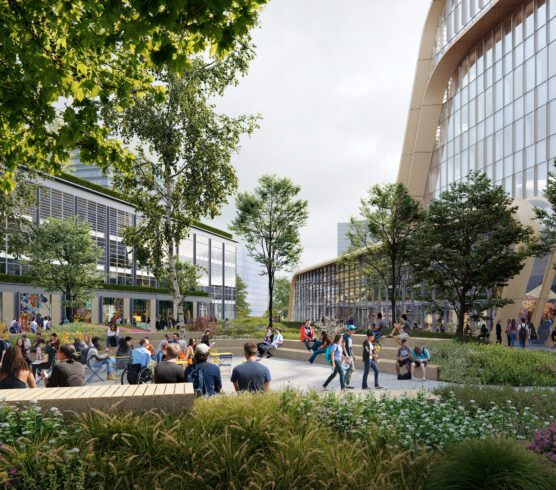 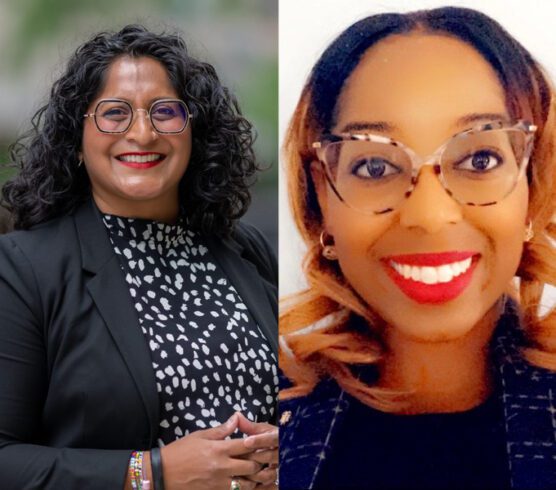