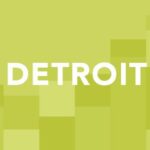 Average number of daily Downtown residents, by month. Residents are counted in the daily average if they stay in their own home that day.

1990 through 2010 figures are from decennial census counts. The 2018 figure is from the American Community Survey estimate of the average annual population from 2016-2020. The dotted line represents a projected trend.

Measures of Diversity and Inclusion

Percent of Downtown population by age

Percent of Downtown population by Race/Ethnicity

Belief that Downtown is welcoming to all racial and ethnic groups

Belief that Downtown offers events and activities that are affordable

The DDP is currently tracking 43 major projects Downtown that have been completed since 2018 or are currently under construction.
Source: Downtown Detroit Partnership

For questions or comments about the dashboard or data contained within, contact Joshua Long.