DDP Centennial: The Walk To Freedom 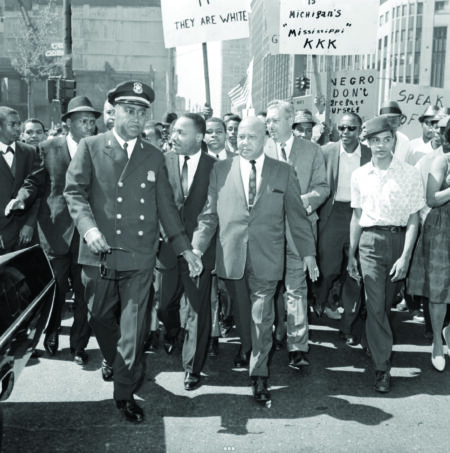 Martin Luther King, Jr and “The Walk to Freedom” and Social Justice

On June 23, 1963,  the 20th anniversary of the Detroit Race Riot of 1943, Rev. Dr. Martin Luther King, Jr. led “The Walk to Freedom,“ a civil rights march of more than 125,000 people, down Woodward Avenue to Cobo Hall, now known as Huntington Place. Dr. King’s remarkable address included the four words that would ultimately become part of his most famous speech, “I have a dream,” delivered just two months later in Washington, D.C.

On June 23, 1963,  the 20th anniversary of the Detroit Race Riot of 1943, Rev. Dr. Martin Luther King, Jr. led “The Walk to Freedom,“ a civil rights march of more than 125,000 people, down Woodward Avenue to Cobo Hall, now known as Huntington Place. The Rev. Dr. Martin Luther King’s historic address in Detroit brought out important leaders of the time, the Rev. C.L. Franklin, the father of Aretha Franklin, Detroit Mayor Jerome Cavanagh and Reverend Albert B. Cleave, who was a principal organizer of the March alongside Reverend Franklin.

It was one of the largest demonstrations of its time. His work’s mission was to eliminate segregation and create opportunities for people of color; at the time, less than 5 percent of the Detroit Police force was Black.

The march started near Adelaide Street, came down Woodward Avenue to Jefferson Avenue, then headed west through the Civic Center. An hour and a half after it began, it ended at Cobo Hall, where 25,000 people, an estimated 95% African American, filled the building.

In 1963, the city was 40 percent Black. Today, Detroit has the third-largest African-American population among U.S. cities, with over 80 percent of residents identifying as Black or African-American.. Racial issues have dominated the Detroit conversation for decades. Throughout, the Downtown Detroit Partnership (DDP) understood that only through the success of all citizens can the city and ultimately the state survive and thrive.
Diane Edgecomb was named president of the Central Business District Association in 1980, although her tenure with the organization began in the ‘50s. Understanding the importance of Dr. King’s legacy to Detroit youth, Edgecomb championed putting photos of MLK in every high school in Detroit. She is remembered for working closely with mayors Roman Gribbs and Coleman Young, spotlighting women in the workforce and establishing the popular ethnic festivals that started in Detroit’s Greektown and eventually moved to Hart Plaza in the 1970s. The festivals not only served as entertainment and catalysts to increase economic development and foot traffic, but they were also an opportunity to celebrate the city’s diversity.