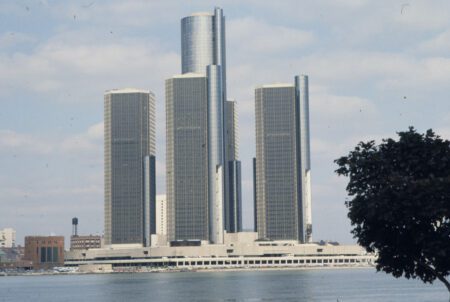 After purchasing the “Ren Cen” in 1996, General Motors completed a $500-million renovation for its new Downtown headquarters and brilliantly created a more inviting and accessible asset for employees, visitors and residents. It is one of the largest corporate relocations in history.

Originally opened on July 1, 1976, the Renaissance Center was envisioned as a revitalization project. GM’s investment and redesign at the start of the millennium transformed the complex into a connection point between Downtown Detroit and the International Riverfront through the addition of the stunning, five-story Wintergarden atrium.

Today, the GMRENCEN “shines a spotlight on the people in Detroit who make remarkable contributions to the city.”

The GMRenCen complex is a group of seven connected buildings totaling 5.5 million square feet. The central tower has been the tallest building in Michigan since it was opened in 1976. Originally envisioned by Henry Ford II as a revitalization project, the complex had gone through various phases and uses since opening its doors in 1976.

General Motors purchased the Renaissance Center for its headquarters in 1996 and invested half a billion dollars in renovations to reposition the Center to its original intentions of integrating and invigorating the city. It succeeded. The Center now better utilizes the riverfront space, makes it easier to navigate the tower’s interior, created a Wintergarden retail and shared space showcase and removed the mechanical berms along Jefferson Avenue that served to shield the towers from the city. This last development set the tone for the new headquarters and opened the RenCen to employees, residents and visitors.

GM’s construction of the Wintergarden, with its unfettered views of the international Detroit River from the Renaissance Center complex, kicked off the redevelopment of the award-winning Detroit Riverfront/Riverwalk.

The principal architect for the Renaissance Center was John Portman, at the time one of the world’s best known and most influential architects. Portman built soaring towers that redefined urban landscapes and was tapped to carry out Ford’s vision to generate investment at the city’s base, increase foot traffic and save the city’s failing economy.

The Renaissance Center’s innovative, cylindrical design, glass windows and futuristic atrium created a beautiful and enticing space for restaurants, retail, banks, offices, and theatres. It was coined “The city within the city.”

The facility features a 74-story, 1,300-room Marriott Hotel, surrounded by four 39-story office towers totaling a combined 2.3 million square feet. Each of the five towers rests atop a five-story podium structure containing 165,000 square feet of retail space. The redevelopment included the full renovation of the hotel and office towers. Two “smaller” towers wer added to east of the complex.

The RenCen was home to the Downtown Detroit Partnership from 2007 to 2016, and its current CEO, Eric Larson, helped General Motors purchase and renovate it for GM’s World Headquarters.

The Renaissance Center is an intricate part of Detroit’s comeback story and symbolizes the city’s faith and perseverance to achieve the record heights that Henry Ford II envisioned.

Please follow the history of the DDP and our important legacy at several stops around the city.