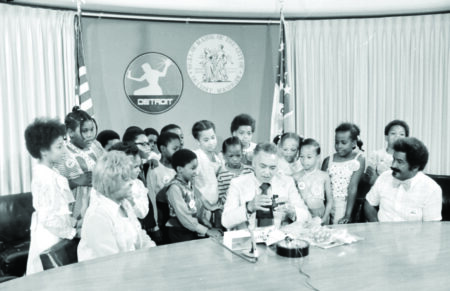 The Downtown Detroit Partnership has a strong history of working closely with city, county and state government officials to support the Downtown in many factions. Here at the Coleman A. Young Municipal Center, we look at Detroit’s diverse leadership over the past 100 years and DDP’s neutral yet activating role.

From 1824 to 1857, Detroit mayors served one-year terms; that increased to two years from 1858 to 1953, and after 1953 mayoral terms were four years. In November 2021, voters re-elected Mayor Mike Duggan to his third term, only the second mayor to achieve this. Mayor Coleman Young, this building’s namesake, served an unprecedented five terms from 1974 to 1994

“The Mayor serves as Chief Executive Officer for the City and oversees all of the City’s departments. Under the direction of the Mayor, the Executive Team is responsible for developing and directing the execution of the Mayor’s vision and key initiatives. The Executive Office also includes support staff involved in the day-to-day administration of routine executive office duties, special projects, and community-oriented events.” City of Detroit website.

DDP prides its collaboration with the public, private and philanthropic communities. Given the above, it quickly becomes evident that without a strong working relationship with city leadership, an organization such as the DDP would struggle to carry out its mission. Detroit business leaders understood this and over the past 100 years, that working relationship was often the catalyst to successfully executing new products and programs launched by the DDP and its predecessors.

Detroit’s mayoral history is ripe with fascinating individuals like most major cities. “Detroit has had 75 mayors in its 313-year history, and, like the city itself, there’s plenty of good — and plenty of bad,” says Dan Austin of the Detroit Free Press. The City has had more than its share of scandal and corruption. However, whatever the party or politics of the day, the position yields power and prestige, and the City would not be what or where it is without these leaders.

Detroiters loved Mayor Young, but he was also considered a polarizing figure. According to the Michigan Chronicle: “Young’s tenure as Mayor was controversial from beginning to end. His combativeness on race endeared him to blacks but turned off many whites, some of whom accused Young of racism, especially when he scorned political challengers as ‘Uncle Toms.’ He was a big daddy, a black Santa Claus, a popular streetwise politician, and a hero to the people of Detroit. He was all for his people and never changed who he was to make anyone else feel comfortable.”

One very comfortable leader with Mayor Young was Central Business District Association (CBDA) President Diane Edgecomb. The CDBA, a forerunner to the DDP, Edgecomb and Young developed a lifelong friendship. Both had the City’s interest in mind and a vision for a vibrant and engaging city for residents and businesses. During their collective tenures, the CDBA, working alongside the city government, instituted many vital programs, including Ethnic Festivals, the lighting of the Ambassador Bridge, Detroit Aglow, holiday lighting, and so much more.

Our more recent mayors have been excellent partners in supporting the DDP’s successful implementation of many programs, perhaps most importantly, the passage of Public Act 126, providing a structure to establish, fund and oversee the Downtown Detroit Business Improvement Zone. The program had the support of Mayor Dave Bing, and now this public organization works daily to create a vibrant, clean and safe Downtown.

While it is impossible to highlight all of Detroit’s mayors here, we’ve provided two perspectives on the subject from the Detroit Free Press.

Meet the 5 best mayors in Detroit history (freep.com)
Click here for a complete list of mayors from the City’s inception to the present.