DDP Centennial: The Business of Architecture 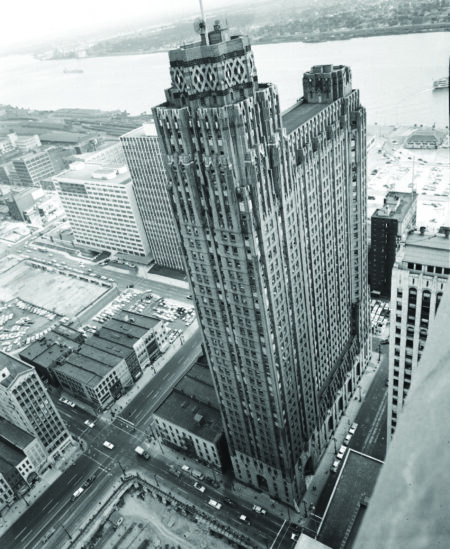 Step inside the Guardian Building, and you’ll be transported to another era. You will quickly understand how this site is a part of DDP’s history and is considered one of Downtown Detroit’s architectural gems. The building was commissioned in 1927, while the city was a growing industrial and commercial hub, and important businesses, such as the Union Trust Company, were staking their claim in Detroit.

The founding members of the Business Property Association understood the importance of having a united voice to create an environment to support existing businesses, encourage new investment and implement activities that would improve Detroit’s viability as a world-class destination. While priorities have evolved over the past 100 years, the Downtown Detroit Partnership holds a similar view today. The DDP takes great care to celebrate jewels like the Guardian Building and maintain the public areas around it.

“In the 1920s, the City of Detroit was a worldwide industrial and commercial hub, and the city grew with unprecedented prosperity. In this era, a newly organized banking group, the Union Trust Company – was anxious to communicate their public image through the flagship headquarters and new offices.” guardianbuilding.com.

The Union Trust Company commissioned the architectural firm of Smith Hinchman & Grylls (today is known as SmithGroup and a current tenant) and Wirt C. Rowland as head designer. Rowland had previously worked on the neighboring Buhl and Penobscot buildings. The project started in 1927 and was completed in early 1929 – the year of the stock market crash. The Union Trust Company fell victim to the crash but was saved by investors who believed in the company’s future and Detroit’s. It was reorganized into the Union Guardian Trust Company, and, eventually, the owners shortened it to the Guardian Building.

The building was designated as a national historic landmark in 1989.

Today, the Guardian Building, which was designated as a national historic landmark on June 29th, 1989, is one of the world’s most significant and striking Art Deco skyscrapers. Visitors and those lucky enough to work here are awestruck by the explosion of color, craftsmanship and blending of Native American, Aztec and Arts & Crafts influences.

Of course, there are many more architectural gems to discover in Detroit. Albert Kahn, Minoru Yamasaki and C. Howard Crane are just a few prominent architects who have left their mark in our great city.

Just south of the Guardian Building is One Woodward, designed by Yamasaki, the architect responsible for the first World Trade Center. A short trip west takes you to the Grand Army of the Republic Building, a triangular castle on the west side of downtown. The GAR Building was built for the Civil War veterans and opened in 1901. Take Woodward Ave. north, and you’ll see the marquis of the Fox Theatre, built in 1928 as a movie palace.

The stories behind the buildings and the men who built them are as grand as the buildings themselves, each marking the growth of the city’s business and architectural landscape.

To further explore the subject, please consider reading the following: