DDP Centennial: How It All Began 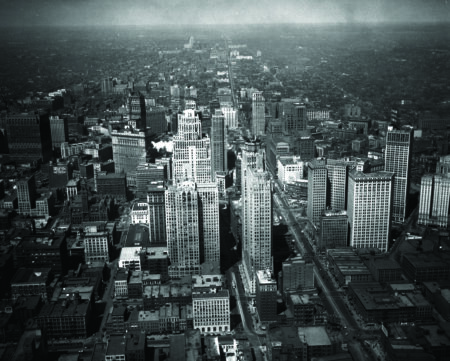 Home / News & Insights / DDP Centennial: How It All Began

In 1922, Oscar Webber of J. L. Hudson Company gathered 13 Detroit businessmen at the Hudson Co. offices to establish the Business Property Association — today’s Downtown Detroit Partnership. The meeting was held to investigate the tax situation on Downtown business properties, protest the 1922 increased assessed valuations and encourage building a subway that would travel many miles for future expansion.

The atmosphere was full of energy, enthusiasm and excitement in Detroit, as evident by the many other organizations and institutions that began during the same time period. .  These include the Booker T. Washington Business Association and the Housewives League of Detroit, founded just a few years later by Reverend William and Fannie May Peck

The city population hit 1.6 million in the 1930s, and as the United States journeyed through its industrial revolution, Detroit followed suit. The completion of the famous Diego Rivera Mural at the DIA, the opening of the Detroit Windsor Tunnel and the Ambassador Bridge were among many markers of a growing and prosperous city.

While the organization’s name has changed several times, the mission has largely remained the same – to cultivate economic and social impact in Downtown Detroit; connect public, private and philanthropic partners; provide stewardship of public spaces; and develop programs that engage and benefit all.

Here is the list of founding members. Detroiters today will still recognize the names and companies listed below.

DDP, through the Decades

Please follow the history of the DDP and our important legacy at these stops around the city:

You are standing in the Downtown Business Improvement Zone (BIZ) Ambassador Center.  The first BIZ plan was approved on  April 15, 2014, property owners approved the Downtown BIZ Plan, which establishes a formula for BIZ assessment calculations, rules for governing the election of Board members, and the scope of projects the BIZ will undertake. The BIZ charges the BIZ Board of Directors, a volunteer group of Downtown leaders, with the responsibility of creating a budget that aligns with the BIZ service delivery goals and needs. The BIZ Plan is valid for ten years.

The Business Improvement Zone Board of Directors contracts with the Downtown Detroit Partnership to help manage and run the Downtown BIZ Ambassador program.