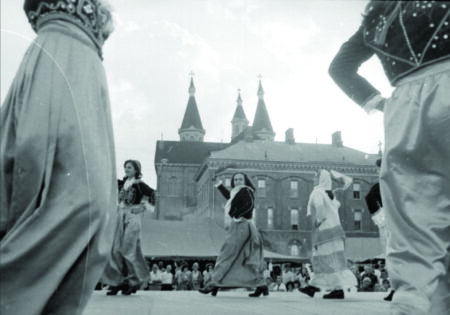 Like most of Detroit’s neighborhoods, this area we now know as Greektown has gone through many transformations.

It was initially established by German immigrants in the 1830s. In the late 1800s, the Germans relocated to the city’s outskirts, paving the way for an influx of Greek immigrants fleeing persecution. In 1886, the first recorded Greek immigrant, Theodore Gerasimos, arrived in Detroit. In 1900, the first Greek café opened up on Macomb Street, and by the 1920s, it was solidly Hellenic (Greek) and Monroe Street was becoming a burgeoning commercial district of restaurants and retail establishments.

In the 1960s, city leaders were looking to redevelop the area to allow for more municipal parking and buildings. Greek community leaders rallied together and advocated for improvements to the streetscape and building exteriors and the installation of street lighting to help the neighborhood retain its charm and attract business. With the help of Mayor Roman Gibbs and the commitment of the Central District Business Association (CDBA – a predecessor to the Downtown Detroit Partnership), the enhancements were made.

In 1965, Diane Edgecomb, CDBA president, and Mary Ball, head of the city’s cultural commission, met with Thomas Lito, Greektown Association president and business owner, and other local Greektown merchants. The premise of the meeting was Edgecomb’s idea for the association to sponsor an annual festival, and the CBDA would support them every step of the way. Late that summer, the first Greektown Heritage Festival was held on Monroe Street.

The festival was such a success that the CBDA proposed an expansion of the ethnic festival series on the Detroit Riverfront in an effort to promote the river as a recreational and economic resource for the city. In 1969, Detroit had four ethnic festivals (German, Polish, Mexican and Greek), and by 1977, 24 ethnicities were celebrating their roots in Downtown Detroit!

While the location of the festival and the merchants and musicians that participated have changed since its creation, the spirit and significance of the celebration has remained constant throughout the years.

Greektown, through that first festival, opened our minds, hearts and palettes to the idea of embracing diversity and bringing all walks of life, from all corners of the world, together. As we stand here today, we can all agree that we’re much better off because of it.