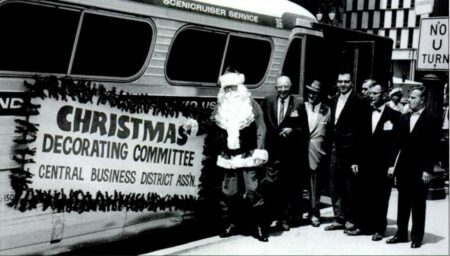 In 1954, thanks to the innovative thinking of Central District Business Association President Diane Edgecomb, the first Downtown Detroit Days (DDD) festival was planned. (The CDBA was one of the predecessor organizations to the Downtown Detroit Partnership.) Foot traffic Downtown was waning during the week and on the weekends, and stores and restaurants suffered as a result. Edgecomb realized the city needed something to encourage urbanites and downtown workers to spend more time and money in the city and spur suburbanites to come Downtown. Downtown Detroit Days would be a weeklong event to revitalize the city by encouraging business and pedestrian traffic to the heart of Detroit. Businesses were encouraged to offer deals and discounts that would attract thousands of shoppers to retailers large and small, including Hudson’s, Kern’s and Kresge.

It worked. The successful semi-annual event offered shoppers an opportunity to take advantage of money-saving values in an atmosphere filled with special events, live music and enticing prizes. The CBDA-sponsored Downtown Detroit Days were the most successful continuing sales program in the U.S for over 20 years.

Over the years, events and attitudes of the times would threaten DDD’s success, but the CDBA persevered. So did Edgecomb. The 1967 uprising heightened fears for residents and non-residents and increased racial tensions and mass economic fallout for the next decade. Businesses either closed or relocated. City leaders knew they needed a viable and drastic solution to prove that Detroit was a safe space where families could live and shop. One critic sarcastically joked that the city should stage a live childbirth to demonstrate the safety of downtown — a suggestion that ironically sparked an idea from Edgecomb. She recommended the next best and less graphic alternative – they would kick off the 1976 Downtown Detroit Days with a public wedding.  The lucky couple, Diane Hartley and Stanley Engram wanted to get married but didn’t have much money. CDBA and other city leaders wanted people to regain confidence in the city.  The Pontchartrain Hotel donated a room for the newlyweds, Sanders provided a three-tiered cake, Carl’s Chop House threw in dinner for four, Grinnell provided the music, and Hudson’s, a bouquet and boutonniere. The result was a beautiful gathering for all of Detroit.

Over the years, the CDBA would constantly revolutionize the festival to offer fresh prizes, new bargains and amusing contests to ensure the event never became stale to attendees.

One of the most popular was the creation of Mystery Shoppers – individuals who would randomly select lucky shoppers and award them with exciting gifts.

During the 1950s and ‘60s, transportation and parking were major concerns, so the CBDA made sure that the city offered free or discounted parking prices. As a courtesy to DDD shoppers, the Detroit Department of Street Railways (DSR) and the Department of Transportation (DOT) provided free minibus service or reduced fares and partnered with CBDA to run promotions.

For its 11th anniversary, they awarded one contestant a 1965 Plymouth Sports Fury Convertible, and in 1972, the DDD Grand Prize Winner drove off with a brand-new Dodge Colt Sedan.

Most companies reported their sales doubled during Downtown Detroit Days and used DDD as an opportunity to clear inventory that had been long collecting dust on shelves. These biannual shopping weekends were overwhelmingly the most profitable revenue periods for these local retailers.