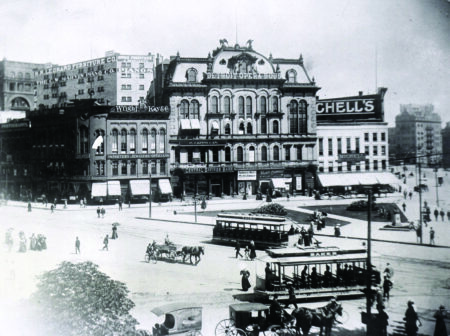 The Detroit Opera House opened in 1922 in the Grand Circus Park Historic District. The 3,500-seat auditorium, designed by renowned architect C. Howard Crane, was, at that time, the fifth-largest theatre in the United States.

The Downtown Detroit Partnership partners with organizations like the Detroit Opera House to highlight the talented artists and productions that help shape Detroit’s cultural landscape.

In the 100 years since its creation, the Detroit Opera House has been a cultural hub for some of the world’s leading operas, Broadway shows, dance companies, comedians and concerts.

Detroit’s first opera house was designed by Mortimer L. Smith and built-in 1869 on Campus Martius, but was destroyed by fire in 1897, rebuilt and reopened on the same site in 1898. In the early 1920s, John H. Kunsky partnered with his former accountant and lawyer, George W. Trendle, and opened a number of theaters both downtown and in Detroit neighborhoods.  Their next ambitious plan was to relocate Detroit’s entertainment center from Campus Martius to the growing shopping district around Grand Circus Park. They soon enlisted the help of prominent architect C. Howard Crane whose international travels to European Operas and impressive resume made him the perfect candidate for their vision. Crane was also the principal architect for many other major Detroit landmarks, such as The Filmore Detroit, The Majestic Theatre, the Fox Theater and the Detroit Symphony’s Orchestra Hall. In 1922, Kunsky and Trendle’s vision became a reality with the creation of the Capitol Theatre, known as Detroit’s first “true movie palace” and future home of today’s Detroit Opera House.

Under the new ownership of the Paramount-Publix chain, the theatre would be renamed the “Paramount Theatre” in 1929, closed three years later due to the depression and would remain closed for another two years until being purchased by United Detroit Theatres in 1934. UDT renamed the venue “Broadway-Capitol Theatre” after recognizing that many moviegoers still called the building the “Capitol” even in its Paramount days. The Broadway-Capitol years were very successful, marked by performances by the talented Duke Ellington, Louis Armstrong and Guy Lombardo. During the 1940s, the theatre served as a temporary escape from the tensions and turmoil of the Second World War by offering showings of classics like “Casablanca” and tickets to the Sunday hit “Radio Schoolhouse” show hosted by WXYZ’s Dick Osgood. In 1954, the Broadway-Capitol theatre would be the site of Detroit’s first rock show featuring Bill Haley & The Comets.

In 1960, the theatre began to fall behind its competitors. This prompted the president of Detroit United Theatres to invest $100,000 into a renovation that consisted of nearly a 2,000-seat reduction, new carpeting, and updated lighting to give the building a more spacious and modern feel. This new appearance, of course, came equipped with another new name, “The Grand Circus.” The Grand Circus hosted Detroit’s first-ever International Film Festival in 1964. The Downtown Detroit Partnership was integral to the planning and success of the Festival.

However, the decline of Detroit’s residents during the ‘50s, ‘60s and ’70s, caused downtown movie attendance to suffer, and the theatre closed in 1978. In 1981, the theatre reopened with a new name, “Grand Circus Live,” and with a new purpose as a rock concert venue. Legends like Ray Charles, The Clash, R.E.M, the B-52s and Bon Jovi would take the stage during these years. In 1985 a small fire forced the building to once again close for what many believed would be the last time.

David DiChiera, then General Director of the Michigan Opera Theatre (MOT), wasn’t so quick to give up hope. He credits this mainly to Luciano Pavarotti, one of the most successful opera stars of the time, whose advice he solicited on whether the theatre could be transformed into an Opera House or if it was beyond repair. Pavarotti was a big fan of the building’s acoustics and structural bones and promised DiChiera that if he “finished it, I’ll come and open it for you.”

While the MOT officially purchased the theatre in 1989, it would take years of planning, funding, building and renovating before the transformation of what we know today as the Detroit Opera House would be complete. The Central Business District Association (CBDA), a DDP predecessor, was instrumental in raising funds to restore the site as a viable operatic and concert venue. In fact, President Diane Edgecomb and CDBA members joined Mayor Dennis Archer for a fundraising dinner in the auditorium amidst MOT renovations. DiChiera was adamant about restoring the building to resemble the original 1922 Capitol design with as much historical accuracy as possible.

In 1996, the Detroit Opera House officially reopened, featuring the promised performance of legend Luciano Pavarotti! That same year MOT produced its first opera in its new home, Giacomo Puccini’s “La Boheme.” Since its 1996 reopening, the opera house annually produces five opera productions and presents five dance productions. Some of the most successful performances in recent years include Margaret Garner, Cyrano, X:The Life and Times of Malcolm X, and dance productions from Dance Theatre of Harlem, American Ballet Theatre, Alvin Ailey American Dance Theater, and the Joffrey Ballet.  Additionally, Detroit Opera has a long standing partnership with Broadway in Detroit, whose productions on the Opera House stage have included long runs of The Lion King, Wicked, Aladdin, and most recently Ain’t Too Proud. This year, 2022, the Michigan Opera Theatre was renamed Detroit Opera.

Over the past hundred years, the owners, name, and mission of the Detroit Opera House have changed. However, it has remained a foundational center for entertainment, architecture and culture while simultaneously serving as a source of economic revenue that has helped encourage interest and growth downtown.